Corrupt former Chief Justice Spigelman resigned  with no adequate explanation for his early departure.
Question: Will Chief Justice Bathurst take action in these circumstances ?
Answer: NO. He continues to cover up the criminal activity of the profession he leads. Chief Justice Tom Bathurst is also head of the NSW Judicial Commission. ALL complaints concerning criminal judicial activity are silenced. This silence is protected by all sides of politics in Australia. Former Chief Justice Spigelman and successive Australian governments have colluded to destroy LAW in Australia to protect their own financial and corrupt dealings. Will new Chief Justice Tom Bathurst bring an end to this corruption ?


Surely no Australian Judge who colludes to cover up the murders of Australians and aid the Australian government should continue to hold a public office as Justice Brereton continues to do.


Army reservist Justice Brereton has covered up the torture and murders of many Australians BUT remains on the Supreme Court Bench.
When will Chief Justice Tom Bathurst remove Justice Brereton ?

The book 'Spook Justice' is the accumulative research and experiences of more then 20 years.


Jewish Judge, J J Spigelman survived the holocaust to create his own holocaust of injustice as Chief Justice of the NSW Supreme court. Spigelman organised and sold judgements, perverted the course of justice, assisted murderers now wanted by Interpol.

Buy Spook Justice and see comments and book reviews at:

Spook Justice was published in January 2011. Chief Justice Spigelman announced his intention of resignation on 18 March 2011.

Based on a true story Spook Justice reveals the real state of Australian politics and the biggest fraud perpetrated on Australians.

Over 20 years of research. 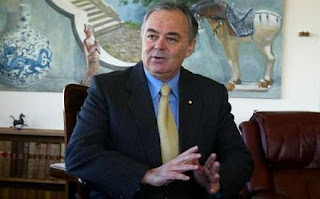 Posted by Vital News Australia at 12:03 AM

Who follows this blog.

Boycott Woolworths and Coles in support of Aussie farmers & Producers